When your pup climbs on your chest while you’re lying on your back on the couch, look at him. I mean really look him. Man to pup square in the eye. Do you notice something you’ve never noticed before? Franklin, your Chihuahua couch potato partner, has not one, not two, but three eyelids. Three eyelids? Is something wrong with Franklin? Yes and no. Franklin, like all dogs, was born with a third eyelid. But if you can actually see eyelid number three, that could be a clear sign that something’s wrong.

There’s nothing abnormal about a dog having a third eyelid because they all have one. The third eyelid even has its own name: the nictitating membrane, or haw. These membranes are the same in different breeds and sizes of dogs, although the pigmentation of the third eyelid may vary from breed to breed. Some are very clear while other dogs have cloudy third eyelids.

When the nictitating membrane closes across a dog’s eye, it looks as though his eye is rolling back in his head. In fact, sometimes when he sleeps, the upper and lower eyelids open making it appear he has all white eyeballs because the third eyelid is closed.

Other than the ability to wear the latest smoky eye shadow, eyelids serve a real purpose. It’s a skin and muscle fold that we voluntarily open or close over our eyeballs to protect them. Human eyes have both an upper lid and a lower lid. Dogs have those too, plus a “third lid” in the inner corner of their eyes under the lower lid.

Deborah S. Friedman, D.V.M. and diplomate with the American College of Veterinary Ophthalmologists says that there are four functions of the third eyelid in dogs. First, it acts as a “windshield-washer” for the cornea (the clear window in front of the eye). “It clears debris and mucus off of the cornea,” she explains. Also, the gland of the third eyelid produces about one-third of the dog’s tears. The third eyelid contains lymphoid tissue which acts as a lymph node and produces antibodies to fight infection. Finally, it protects the cornea from injury. The human eyelid also protects and nourishes the human cornea, but it performs similar functions with two eyelids as opposed to three.

Dogs aren’t the only animals with nictitating membranes. Birds, cats, reptiles, fish, and camels also have three eyelids. They keep the animals’ eyes moist in the face of wind, sand or dirt without them having to blink. This is very useful when hunting for prey that could be missed during that split second of blinking time.

On our next page, we’ll talk about ways to solve some problems with the third eyelid. 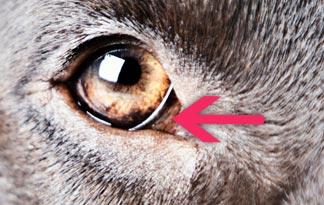 The third eyelid doesn’t always make an appearance and is not easily seen in most breeds. However, sometimes dogs are born with visible haws. Show dog owners don’t like haws because they feel it takes away from the valuable appearance of a show dog. Veterinarians, however, don’t feel a less-than-pretty image is a medical reason enough to have them removed.

Still, it’s important for a dog owner to recognize if there is a problem with the third eyelid. If you do notice your dog’s third eyelid when it hasn’t made an appearance before, it could mean your pet’s eyeball has sunken into its socket due to severe eye pain. It could also mean there’s an eye injury or that the structure that holds the third eyelid in place somehow got injured or has become weakened. Dr. Friedman says that a visible haw can also indicate other problems including allergic conjunctivitis and autoimmune diseases.

A visible nictitating membrane may also be a symptom of “cherry eye,” so called because it looks as if there is a small red cherry on the inside corner of the eye. The medical term is prolapsed gland of the third eyelid. What’s going on is that the supporting cartilage of the membrane folds over and the third eyelid loses its windshield wiper function, explains Dr. Friedman. The gland gets exposed and can become very inflamed. If your dog isn’t taken to a veterinarian, the gland can sometimes lose some of its tear function, causing a painful condition known as “dry-eye.”

The cherry eye is a congenital defect found in breeds like cocker spaniels, beagles, Boston terriers, and bulldogs. Surgically removing the tear gland or the third eyelid compromises the eye’s ability to produce tears so a lot of veterinarians don’t recommend it. They do however recommend surgery to reposition the third eyelid.

It’s up to owners to help protect this vital part of a dog’s body. Dr. Friedman advises dog owners to call their veterinarians when they notice any sudden change in the appearance of a dog’s eye including redness, cloudiness, ocular discharge, squinting, rubbing the eye, change in vision, or a protruded third eyelid. “Any of these conditions should mean an immediate call and rapid medical attention,” she says.